We use cookies to ensure that we give you the best experience on our website. If you continue without changing your settings, we will assume that you are happy to receive all the cookies from the Godstone Parish Council website. However, if you would like to, you can change your settings at any time.
Deny
You are here: Home 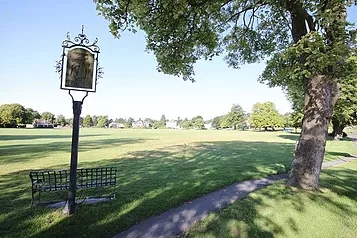 Godstone Green is an area of common land situated in the centre of Godstone Village and was given to Godstone Parish Council by Sir Peter Greenwell in 1950.
The Green comprises a grassed area bordered on all sides by a variety of trees, notably some venerable Horse Chestnuts.
Facilities include a sports pavilion, a football pitch, cricket square, childrens play area, and a boules pitch. In addition tennis and bowling are catered for in an area south of the Green.
The Green is a venue for a number of events such as occasional funfairs and a very popular Village Fete and Donkey Derby held every August Bank Holiday. In 2012 the Green hosted a special event for the Queen's Golden Jubilee and later on large crowds witnessed the Olympic Flame passing through the village.
In earlier times the pond on Godstone Green was used as a horse-pond with a sloping bank down which the wagoners drove their horses. To-day the pond has a brick surround and a central island. Although fed solely by surface drainage, it attracts a variety of bird life and is a much-loved feature. In periods of drought the water can get quite low and unfortunately there is little that can be done about this.
A rope making business used to operate on the Green until the beginning of the 20th Century and until recent times the old Rope Walk could still be seen faintly.
USING THE GREEN TODAY
Councillors encourage the use of the Green.
It is there for the public to enjoy and for the use of Community Events.
Casual Horse and Cycle Riding are not permitted unless as part of an event pre-agreed with the council, this is to ensure the safety of other green users.
All organisations that use the Green must have Public Liability Insurance as it covers the cost of legal action and compensation claims made against your business if a third party is injured.
If you would like to know the open space charge and community events charge then please contact the clerk - This email address is being protected from spambots. You need JavaScript enabled to view it.